Thank you for your patience while we retrieve your images.

Friday morning, September 16th, 2011 dawned to a brisk, bright and somewhat cloudy day after a rainy night, feeling like the first day of fall. We knew we were in for a hike so everyone had layers of clothing to adjust to the variances in the weather and physical activity. There was great camaraderie amongst the artists as many of them got to know each other for the first time, 13 of us in all, coming from points all over Maine, Massachusetts and one from Connecticut. “Painting the Unknown: Artists Paint the Proposed National Park” was hatched a week and a half before and the invitation was put out on the Maine Arts Commission site and in the Bangor Daily News and the Maine Sunday Telegram to come and hike unknown trails and produce a piece of work that could be used to illustrate what is special on Roxanne Quimby’s 70,000 acres that could make it fit to be a national park. The artists who participated were: Jen Holmes, Mary Lou Moulton, Gaile Nicholson, Caren-Marie Michel, John and Pam Redick, Melinda Campbell, Renee Lammers, Evelyn Dunphy, Sandy Dolan, Milton Christianson, Michael Branca and myself, Marsha Donahue.

Most people, except the locals who have walked, hunted, fished and paddled this land with its rivers and streams, don’t know the lay of the land here. Photographs would be one way to show the public but, in the spirit of Frederic Edwin Church and Albert Bierstadt at the turn of the last century, sending in the artists for their interpretation often produces some timeless results. Church and Bierstadt were able to show New York society what was so remarkable about the American West at a time when no one had traveled there. Artists, too, seem to like being on the cutting edge of knowledge and able to herald change in society.

With a 16-person van donated by New England Outdoor Center’s Matt Polstein and driven by Dave Weatherbee, which carried one canoe, we packed the back of a truck from Sewall Company, driven by Sarah Spencer, our guide, and headed off to Stacyville to the turnoff to Lunksoos Camps, 12 miles in on the East Branch of the Penobscot River. Historically, this is known as the site of Donn Fendler’s rescue in “Lost on a Mountain in Maine”. Each artists equipment is a very personal assortment of things, unique to each artist and honed over a lifetime of trial and error. Taking that assortment of things a mile and a half into the woods is quite another thing and some realized upon arrival at Lunksoos that the lawn chairs couldn’t make the trip. Others, however, took everything they might need, and, in the spirit of respect, we helped each other carrying equipment, no matter what it was.

Five of the artists stayed at Lunksoos and painted on the grounds of the camps from the big, sweeping front lawn stretching to the banks of the East Branch. The other eight artists, plus our two guides, began the shuttle across the East Branch, two at a time, plus the guide, up stream about an eighth of a mile to the trailhead. Eventually we were all assembled at the trailhead and, carrying our equipment, started off across virtually uncharted trail, marked only by scraped blazed in the tree bark. Everyone was chortling away until very soon we ran into a stream we could not cross. What to do? Sarah, our guide, was apologetic and trying to think of an alternate route but we all just dropped our packs, went into the woods and, at her suggestion, dragged fallen trees to build a bridge. Never a discouraged word was expressed, we just worked until we got everyone and the equipment across the stream. Michael Branca said, “We’re artists. We solve problems everyday. That’s what we do.” Having taken part in many a team building exercise at Hyde School in the late 70’s I can tell you that it was remarkable that, hardly knowing each other, we immediately pulled together and, in 15 minutes, were on our way. The only one who charged ahead and actually walked through the water was Caren-Marie Michel, not atypical for her. Nothing stops her. This led to talk about how a reality show about artists would work; building bridges in the woods or going to outdoor shows where it pours for 4 days straight, etc.

Along the forest floor that wound through fern glades and up ridges and down, along streams, with occasional holes in the canopy shedding big golden sun spots, were a multitude of beautifully colored mushrooms and an occasional tree turned to fall color. Except for the low chatter of the hiking artists, the forest was quiet and cool and lovely. At one point I posited to the artists to imagine this as national park. Did they think this landscape was of that caliber?

After a half mile we came to a tote road which was much easier hiking and fairly quickly walked the other eight tenths of a mile to the Wassataquoik Stream. We first came to a beach with a bridge visible in the distance up the stream. Caren-Marie stayed there and painted while Evelyn, Milton, Michael, Melinda, Sandy, Pam and I went to the bridge. It was quarter of twelve. Some ate a snack but most of us got right to work, some going down the precipitous bank to the shore and some of us staying up in the wind on the bridge. The stream is wild, tumbling water with large diagonal juts of shale stretching almost to the center of the stream on which you could walk. Above and below the bridge were large sections of quick water, making me wish I had my fishing pole, though it’s out of season anyway. I heard later that a ways above the bridge is a place where another stream joins the Wassataquiok, known to be where the Native Americans traditionally took out large amounts of salmon every year. I could believe it, seeing the quick water where we were. The dark-bottomed clouds were accents in a sharply lit landscape, whipped by the wind, all-in-all a beautiful fall day, the kind artists love.

Everyone worked intensely for 3 hours until we packed our equipment and headed back, reversing our crossing of the bridge, which had been made much better by Sarah while we painted. We shuttled back across the East Branch and communed on the shores at Lunksoos to have a preliminary look at what each of us had done, including John, Renee, Jen, Gaile and Mary Lou, who had stayed at the camps. It never ceases to amaze me that you can put a group of artists in front of the same scene and get such different results. This was a very accomplished group of career artists, making the results very polished, as well.

We loaded up and headed back to North Light Gallery, stopping for one sweeping view of Katahdin from Sherman. We were all too beat to do any more sight seeing so headed straight back. We were greeted at the parking lot across from the gallery by press and friends and, once in the gallery, proceeded to frame and prepare the work for exhibition, including a photograph of each piece for use by the campaign for the feasibility study for a national park.

Saturday continued the clear, beautiful weather. The show was hung for all to see and, though there were a wide variety of styles and views, there was a common visual thread to the collected work. No one seeing it could believe all the artwork was created in one day. Some of the artists stayed all day and painted on the street around the gallery and were joined by Mark Miller, who set up and played into the intersection. Being as it was the Trails End Festival that weekend, it seemed entirely appropriate to take it to the street, thus a cultural happening took place on our corner. Some artists stayed around Sunday as well and painted along the Golden Road.

I am very grateful to Matt Polstein, Dave Weatherbee, Sarah Spencer, the Sewall Company and Eliotsville Plantation, Inc. for the time, equipment and man hours to help this event happen. I have been on expeditions enough to know that unless there is good planning and careful guidance, any number of things can go wrong. Thankfully, this day went smoothly and the artists were allowed a carefree day to explore this land and produce their work. My thanks to those who made it possible, especially to Roxanne Quimby who responded so enthusiastically to the initial idea.

We are hoping something like this will become an annual event, or possibly twice a year, and welcome any artists who would like to participate in a North Light Gallery Paint Out to email us your information at [email protected]. This work is for sale and will be on display until the 30th of September. Prices are listed with the individual pieces. 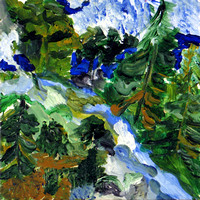 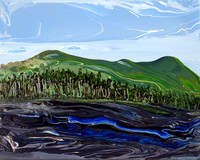 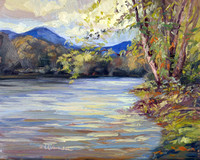 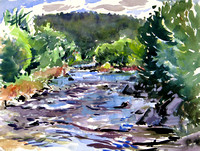 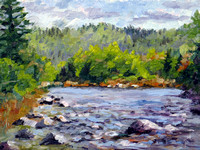 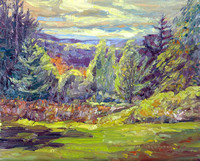 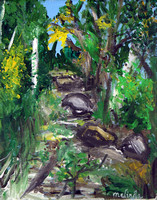 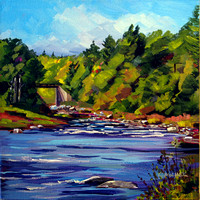 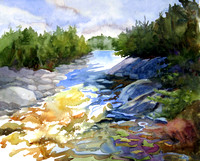 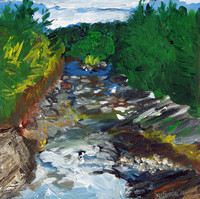